"DIY nightlife in New York City is quite an impressive achievement given the high volume of other, more institutional nightlife venues and agendas all through New York’s five boroughs. New York City is known all across the world for its bars, nightclubs, music venues and other social spaces, not only because of the city being a microcosm but also because of the rather lenient limitations of the city’s curfew on alcohol sales, allowing clubs to operate until 4:00 am or later."

This article describes the impact of the pandemic on queer nightlife and was written by a senior journalism student following a beat developed and thought about in terms of the "local" in a journalism course at Pratt Institute that was upended by the pandemic. 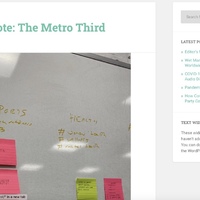