A virtual exhibition by the Evansville Museum of Art, History and Science
COVID-19 Patient
Part 1 of 4
I'd been in IU Health Bloomington Hospital for almost two weeks. On April 17, a nurse came to pick me up in a wheelchair so I could be discharged. As we left my hospital room to enter the COVID-19 Isolation Unit lobby, it was a bit surreal.
Everything was draped in large, translucent plastic sheets, taped shut with dark blue duct tape, and it was very cold due to negative airflow blowers blasting away. As I neared the counter to sign my release form, the nurse picked up a bell and started ringing it loudly. Suddenly, ghost-liked figured draped in protective gear came out from behind the plastic and began cheering and applauding me. It was an emotional moment for all of us, because we realized I was one of the few to actually leave the hospital alive after having had COVID-19. It's not an exciting story, but I know many are curious what it's like to be sick with the coronavirus.
I'd started working from home selling Brown County Democrat ads around March 15, when the owners OK'd any employee who could work from home to do so. As each day in quarantine passed, I felt very safe, especially since I was having no contact with anyone. I only ventured out twice, once to pick up some takeout food and then to buy some groceries. My girlfriend Deadra got sick first, and on Friday, March 20, called into her work place to take a sick day.
[continued]

COVID-19 Patient
Part 2 of 4
She had a heavy cough, lots of mucous, and just generally felt bad. But she didn't have a fever. When we called in for a video appointment with the hospital emergency room, she was turned down for a visit because of no fever and her younger age than those considered most at risk. She started to get well right away. I started feeling bad the next day. I was able to keep up with my job, but symptoms were starting to get in the way. I had a heavy, dry cough, mucous-filled lungs, a fever, and lots of pain. By the next day, I could hold nothing in or down, not even a drink of water. Soon, I was beginning to get dehydrated. We made our first call to the hospital emergency room and I was turned down for entry. This decision was based on the U.S. Surgeon General's guidelines, we were told. No one could go to an ER, clinic, or doctor's office without prior permission, and I wasn't considered sick enough.
As each day passed, and I got sicker, I finally reached a point where I could no longer work. I had to call the boss and let him know the situation. By this point - around April 7 - I could barely talk, I was too weak to get out of bed, and had a horrible cough. I still could keep nothing down or in. I thought I was sleeping, but realized I was actually losing consciousness. At this point, I weighed myself and realized I'd lost over 30 pounds in a very short time span. It was time for another video call to the hospital. Again, I was turned down. I was encouraged to call my personal doctor, and after talking to me for a few minutes, he called the hospital himself. He stayed on the line with them until he got permission for me to go to the emergency room. He came back on to our call and told me to go to the ER in Bloomington as fast as possible. An entire team met me at the entrance. It was the first time I saw all the plastic sheeting closing off everything, and heard the air blowers fighting to change the air to negative pressure. I was put into a wheelchair and rolled away.
[continued]

COVID-19 Patient
Part 3 of 4
My girlfriends was directed to a different part of the parking garage, and I wouldn't see her again for over two weeks. Once inside, I was taken to get a full body X-ray, and MRI, a CT scan and other tests. Technicians were trying to draw blood, but were having trouble finding a vein since I was so dehydrated. When they did find one, they weren't going for the little test tubes of blood, but small bottles - lots of small bottles. Finally, the ER doctor came to talk to me, but the air blowers were so loud, I could hardly hear her. She finally drew close enough that I could understand her. I had double pneumonia and had lost about half of my breathing power. She also told me that she felt I, indeed, had COVID-19, and they would test me right away. It would be a few days before results would come in, though.
A nurse came to me with two, 2-foot-long cotton swap sticks. The first one went down my throat and swabbed the back. That one didn't bother me. The second one, though, went down my nostril. Whatever liquid that was coating it burned like a hot poker and stung my nostril for probably 10 minutes afterward. I was barely able to react, though. I was so weak. I had the terrible cough, really high fever, and was almost unconscious. The ER doctor intervened and got me admitted right away. For at least the next 12 hours I was poked, prodded and drained of more blood. Finally, the regular COVID-19 doctor came in to tell me I would be receiving the hydroxychloroquine drug immediately. There's not a lot to tell about the numerous days spent in isolation. Each day, a nurse came in around 4 a.m. and my name, birth date, where I was, what was I there for, and what day it was. They were very strict that I order and eat all three meals, and if I forgot, they would order for me. This attention would last until about 11 p.m., so I didn't get much rest. I seriously doubt that I had much more blood to give by the end of my stay.
[continued]

COVID-19 Patient
Part 4 of 4
One event did stand out for me, though. My nurse got a phone call on the hospital phone about four days after I was admitted. She turned to look at me to ask if I could take some news. Sure, I told her. She then shared that my COVID-19 test was positive, choking up near the end of telling me. When she looked at me, she had tears in her eyes. I found out later it's because a positive test probably meant I wouldn't be going home. So now you see why it was so special, so emotional for me and the hospital staff that I was going home. I still have lung damage from the double pneumonia, but it should pass with time and therapy. I had been told I'd be on oxygen for the rest of my life and would have to use a walker to get around. I left the hospital with no oxygen or walker. I want to thank the entire staff of the COVID-19 isolation unit at IU Bloomington. They've been working for weeks isolated from their families and loved ones. One male nurse's wife was expecting their first child in three weeks, and another hadn't seen his wife or newborn for months. I want to thank them for making sure one of their patients made it home!

Life In Isolation: The Coronavirus 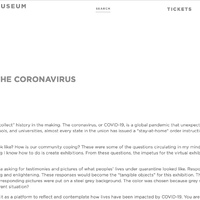 Life In Isolation: The Coronavirus