After huge amount of backlash against the 300,000-yen stimulus payment to the head of the household, the government finally has changed the stimulus check to 100,000 yen per person. However, this had a lot of problems. To begin with, this was proposed in March, and to our family, the money came in August. This mean it took us 5 months to even get the 100,000 yen. In addition, the process was not like U.S. where it was based on tax returns and SSN. Japan does have a similar concept called My Number, but it was not mandatory and a lot of citizens/residents did not have the number. The government were trying to use this My Number, but even then, the people who had the My Number had to fill out forms online which took hours. In addition, multiple forms were put in, and the money was received in July, which is still 4 months after it was proposed. For people who do not have My Number, a physical form was sent to their home address. We received the form in beginning of July, and received the money in August, which means it took them a month to process it. Also, the money was not sent to every citizen/resident at the same time. Some citizens/residents received it faster than others, which caused frustration to the government. Also, some received more than one stimulus payment due to the system being manual and on paper, not by computer. Overall, I was very frustrated with the government’s approach in giving the stimulus check. My brother has received the 1200USD check very quickly and compared to that, Japanese stimulus check took too long. 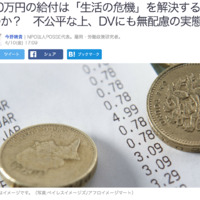 Benefit during COVID-19 in Japan

This item was submitted on September 23, 2020 by [anonymous user] using the form “Share Your Story” on the site “A Journal of the Plague Year”: https://covid-19archive.org/s/archive