My life in February. By Cory McEnroe

My life in February. By Cory McEnroe

My life in February was normal and pleasant. I was starting the baseball season and wrapping up basketball during this time. I remember on Valentine's Day a couple of friends and I went to the mall to hang out and have some fun. We were running around not knowing it would be the last time we would be allowed to. I mean just think about a normal 13-year-old boy's life. It was the best time of my life in 7th grade. I would hop around with my two main friend groups and talk about what teenagers talk about, sports, sleep, weekends. My friend Easton would run around on campus going up to random people and well actually you never knew what he was about to do. That's what I love about my friends, always lively and enjoying life. My normal day looked like getting up at 7 then getting to school around 8 and hustling to first period. Then after listening to people talk about math or something like that go to the next class, until we got to break. When we got to break and had just about the most intense games of basketball that you have ever seen. After a couple more classes we did the same thing at lunch. Then after like two more classes, I think, we headed on down to the locker room to get changed for baseball. We always had clean practices, little to no errors, and great hitting. Then I would pretend to do homework when I got home then I would actually do homework. Then I was in bed by 11:00. Then on March 13 we showed up to school and people were talking everywhere and the teachers met in the pod to talk some more, we didn't know what was happening so we went with the genius idea to tell everyone to go home and buy toilet paper. When I heard that a virus from a bat was spreading from China I knew something was wrong. Really? They can do better. It actually came from a lab because in China there are 1.4 billion people and because they are a communist country they don't care about their people. Also, think about it, corona only affects older people or people with respiratory problems (mostly old people). Making you think yet? Put the pieces together. Comes from a government-run lab, kills off older people, 1.4 billion people, a communist country, population control. It didn't come from a bat, you people are being lied to, there is a safe, cheap cure; hydroxychloroquine. They don't want you to know that because they want you to rely on the government. Sounds a lot like socialism. People don't think about the facts (99.92% recovery by the way), they just trust whatever they are told, whether that be through social media, TV shows, news, and other platforms. Do you know who wants to divide, break down, and control? The government and the devil. The situation we are in now is making the government look like a savior to us. Because WE (we being the government) have the vaccine, WE can flatten the curve, WE can be together by staying apart. See what I'm saying with this? They are seeing how far they can push us. No normal life before this matters until we know what's happening now. If we the people don't do something about this we will never go back to normal. I know that it was supposed to be about normal life in February but I want the facts in the history books. 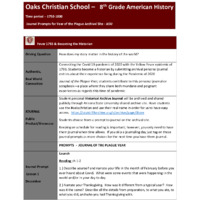 This item was submitted on December 10, 2020 by Cory McEnroe using the form “Share Your Story” on the site “A Journal of the Plague Year”: https://covid-19archive.org/s/archive

Item: My life in February. By Cory McEnroe