American alternative medicine proponent, Joseph Michael Mercola, stated that the World Health Organization (WHO) has started drafting a global pandemic treaty in preparation of a global takeover. in biosecurity. This treaty would grant WHO absolute power over digital identities, vaccine passports, mandatory vaccinations, travel restrictions, standardized medical care, and more. Although the World Health Organization does not currently have absolute authorization over international public health, Mercola argues that the agency is working with the United Nations to pass this treaty on June 16th and 17th so that they may seize absolute control over these entities in order to strip civilians of their basic rights and freedoms based on claims and statistics that seem to exaggerate the climate of the pandemic and its transmissions. As a reader, I am somewhat amused and concern with this information, not because I believe it to be true but because I know that it is heavily misguided. For starters, Mercola tries to persuade readers that the WHO "is not qualified to make global health decisions," but stressed how the agency is tied to international public health and has advocated the public health risk of COVID-19 throughout the whole entire pandemic. Secondly, "The Corbett Report" mentions that the treaty is not expected to be carried out until 2024 which is less urgent of a matter than what Mercola stated in his article (that he mentioned would transpire in mid-June of this year.) Finally, I do not feel that Mercola takes nations and state legislations into account of this treaty and proposal. Although the US federal government mandated the shutdown, it is still up to state legislators to decide the curfews and times the shutdown would commence. Therefore, I think this article, "The WHO Pandemic Treaty Closes in on Absolute Control over Global Biosecurity," offered more conspiracy than tangible evidence, being that this proposal has been drafted or commenced. 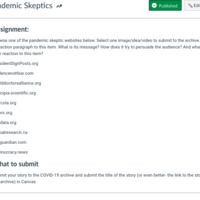 This item was submitted on May 15, 2022 by Ashley Hampton using the form “Share Your Story” on the site “A Journal of the Plague Year”: https://covid-19archive.org/s/archive