The pandemic, rather the first 5 months, was debilitating for my mental health. I suffer from a type of Obsessive Compulsive Disorder (OCD) called "Contamination OCD". This could also be known as germaphobia. When the pandemic began, I began to be cautious. I would slide my sleeves over my hands to open doors at the college I was attending. I stopped touching things directly. For years I already practiced this in the bathroom, such as not touching stall locks before using the toilet or always washing my hands before and after I went. Due to medical issues, my doctors advised me to truly quarantine for 30 days or more. This sent my anxiety into a severe shock. I truly, genuinely did not leave my home for 30 days. There may have been a few trash outings but I did not go to the stores or see friends; nothing. It is hard to describe how my touch was affected, especially if the reader does not understand contamination OCD. An example that truly became a problem for me is Amazon packages. For everyone else, Amazon was still running and this allowed everyone to still have fun; to still live. For me, any package I took in, I used gloves. I would not touch the box. In my mind, the carrier could have had COVID, which would be outside the box. Inside, the handler could have coughed on the item as well. Even the manufacturer could have contaminated it. I cut trash bags in half and laid my items on them as I carefully dissected each one. Anything that came into my home, groceries too, was wiped down with bleach or Clorox wipes (if I had them). Amazon packages were quarantined for 10-14 days in a cupboard so the alleged virus would die and then I could use it. I remember how dry my hands were from washing 20 times a day, at least. The way the bleach would hurt my hands if I forgot gloves. Clorox wipes were familiar and on ration as I cut each one in half to make them last. The gloves I had were the last box in my city after searching for a whole day. I had tickets booked to Seoul, South Korea the first week of March 2020...which was obviously cancelled. For me, everything was dirty until I got to it. Even then, I barely trusted it. My couches, handles, walls, phone, laptop, window, groceries, bags, clothing, and more all went through cleaning as they came into my home. I would never sit on any furniture in "dirty" clothes from the outside. I had to shower and throw them in the wash. My mind was obviously anxious and ill. While I have severely recovered and pushed those limits, I still find myself holding onto those habits, knowing the risk is still out there. My hands still dry out from washing and I use hand sanitizer too much. I haven't had COVID yet, so I am holding out. 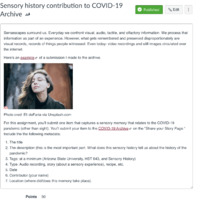 This item was submitted on August 18, 2022 by Ivy Smith using the form “Share Your Story” on the site “A Journal of the Plague Year”: https://covid-19archive.org/s/archive

Item: Germs and Touch: Contact OCD during the pandemic