A Theme Park on Day 1 of the Pandemic

A Theme Park on Day 1 of the Pandemic

Disneyland popcorn comes in a variety of colors and flavors- and with the opening of Galaxy’s Edge in 2019, my new favorite popcorn stand was ushered into being. This stand carried popcorn that had fruity pebble flavoring on its salty kernels, a little sticky, but delicious nonetheless. It was spring break at ASU, and currently, I was enjoying this sweet-salty concoction with not a care in the world, in Disneyland with my family. I was standing under the sad shade of a newly planted tree when my father turned to me, mouth agape, and proceeded to hand me his phone despite the sticky residue I was attempting to warn him about.
His cell phone screen, with its glaring blue light and notifications rapidly appearing across the top, shouted a message at me I would much rather ignore: “The CDC has declared COVID-19 a worldwide pandemic.” Given that my father works in medical software, he quickly snatched the vibrating, ringing phone back and began an onslaught of calls that sounded identical, almost always culminating in “I don’t know what this means.”
All around us, the previously carefree park patrons were beginning to reach into their pockets to investigate the commotion, and finding the same or similar results. Gasps and shouts were heard all around us, and the sound of feet moving quickly increased. Coughs were now akin to fire alarms and sent crowds scattering on the wind. Large throngs of people began to move towards the park exit, but I was keen on finishing my treat. After all, why rush out with hundreds of people when you can stroll out with dozens?
We only remained in the park for about an hour after that, my parents endlessly debating the pros and cons of driving to Arizona right that minute. Would they close the borders between states? Would they get a refund for the cost of the hotel? What would we do with my little sisters’ birthday cake, sitting in a mini fridge and awaiting a dull butter knife later that evening? Families all around us were having the same sorts of conversations, a concert of panic arising in the Happiest Place on Earth.
As my parents squabbled and people scattered, I was struck by the monumental meaning of this moment. Disneyland was going to close- and it previously closed for events like 9/11 and the assassination of President Kennedy. Something was very, very wrong...and I figured I should stop eating my popcorn that had seen unknown hands and unknown places. 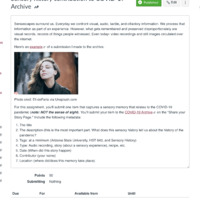 This item was submitted on August 22, 2022 by Arianna Fiandaca using the form “Share Your Story” on the site “A Journal of the Plague Year”: https://covid-19archive.org/s/archive

Item: A Theme Park on Day 1 of the Pandemic