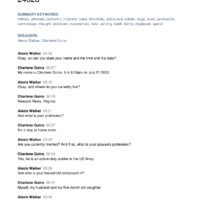 Interview of a military spouse during Covid-19

Since June of 2019 my life has been in absolute chaos. My husband is active duty, and he is in the army. We PCSd to Florida, and he got told to deploy. Unfortunately, I did not find a full time teaching job, and I decided to focus on grad school. At first, I was annoyed that I gave up my previous job in NC, but I decided that I was afforded the perfect time to go to grad school, since I was procrastinating going. I thought a year vacation in Florida sounded alright. I could double up on classes and enjoy the beach. However, I was not a fan of the area around Eglin AFB. It’s expensive and crowded. When it came time for my husband to deploy we packed up the house and we put everything into storage. We figured, six months of savings were in our future, and I went home to PA. The universe laughed at us. My husband’s position in Florida was a 1-2 year position, and he is due for promotion. In order to be promoted he needed to go to a school called ILE. His first choice school was a long shot, since he is in the Army. We assumed he would get an option that allowed for me to return to my old position in North Carolina. That did not happen. My husband got an acceptance into the Naval Postgraduate School, which was his first choice. He told me he got to come home early, which is fantastic news. While all of this is going on, COVID-19 is spreading. Every nonessential business is closed, and the situation is becoming more stressful.
He just called me, and he is coming home earlier still. He’ll probably be in quarantine for two weeks, and we’re hoping that his parents home in Alabama is within his recall distance. A guy from Fort Drum arrived on his post with COVID-19. My husband said everything is/ was shut down. If he can’t stay at his parents all of the money that we saved is going to evaporate.
Meanwhile, I am in NW PA trying to help out my family, and be a successful graduate student. I have six teenage nieces and nephews who don’t know when they will go back to school or work. 2 of my sisters are in the medical field so they should be fine. My other sister is a dental hygienist, and is out of work. Her husband is also out of work. She doesn’t know how her bills will get paid. They’re already living paycheck to paycheck, and her tax return is delayed because of a glitch in turbo tax.
I have absolutely no idea what is going on in my life on a day to day basis. I am beyond stressed and anxious. The only thing that I can do is roll with life’s punches as it changes my plans.
Military families are used to plans changing and nothing being concrete. That doesn’t make it easy though.