Shanna Gagnon conducts an interview with Anonymous. Anonymous is a 5 year old boy that lives in Northern California. He explains his initial reaction to COVID-19. Anonymous discusses how the pandemic has impacted his daily life, including who he can and cannot play with. He describes what people are acting like in his neighborhood. Anonymous details a recent family trip to the beach. He shares what he believes worries people most. And talks about why it is important for his family to stay extra safe during the COVID-19 pandemic. Anonymous imagines what life will be like a year from today and includes a possible new reality for what playground time will look like when he returns to school. His responses also cover how businesses are responding to COVID and his family’s consumer behaviors during the pandemic. 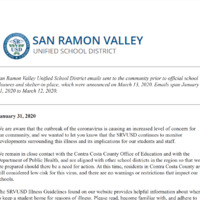 This item was submitted on August 2, 2020 by Shanna Gagnon using the form “Share Your Story” on the site “A Journal of the Plague Year”: https://covid-19archive.org/s/archive