I was on exchange in Edinburgh when Covid broke out. My fellow Australian friends were very unsure of what decision to take in reaction to the outbreak. Most if not all of us underestimated the magnitude of the pandemic and thought that life would go on, albeit with news broadcasts talking more about Coronavirus than Brexit. Most of us hoped we could "ride it out" in Scotland and still have the holidays we had planned. There was some discussion of renting an apartment and living their together, though this was mostly just talk. Eventually, some of our Austrian friends decided to go home because they worried the borer would close and they would not be able to get back into Austria. This brought home the severity of the pandemic, and everyone was rather glum for a time. However, beer is a wonderful thing. Our Austrian friends left, and us Australians started to have serious thoughts about going home but no one wanted to be the first to say they would go because they feared this would be the straw that broke the Camel's back and their departure would precipitate our decisions to return home. I decided I would go home if one of three conditions was met, Australia announced they were going to close the border, everything in Edinburgh shut due to lockdown, or classes and student events ceased to run. Soon most student societies, of their own accord, elected to cease in-person events without official prohibition. Australia also announced a 14-day quarantine for new arrivals. Two friends said they had decided to return home, I called my mum, we both agreed there was no sensible reason for staying in Edinburgh no matter how much I might wish to stay. I thought I would leave within a week because there was much admin to be done, but the threat of their being no more flights into Australia meant my departure date became as soon as a flight could be found. One the day I went to fly home, my flight from Edinburgh to Munich was cancelled and I had to train from Edinburgh to Manchester and from there begin my airborne journey back home. Manchester Airport was the grimmest wait for boarding in my life. When I arrived in Munich nothing in the airport was open. My next flight was to Tokyo. Everything in the airport was open. I got Sushi whilst I waited. I got a lot, I was flush in the funds with 4 months worth of holiday money was no longer going to spend. I then flew to Sydney. And after that to Melbourne. Mum picked me up, drove me home and I got to see my Dog for the first time in three and a half months. This sort of but didn't quite make up for my exchange ending early. The 14 days in quarantine sucked.

The documents I have attached consists of all the emails I received from the University of Melbourne regarding Coronavirus and students currently on exchange. I have submitted them because they document the way in which Covid has most effected my 2020. Fortunately, I have not suffered as have others. The phenomena of students being on exchange when a pandemic breaks out, seems one which is unlikely to have occurred before, let alone on such a grand scale. I have also attached a screenshot documenting a Twitter exchange with Melbourne uni addressing the fact that their international number was not working.
I have attached a number of emails I received from the University of Melbourne regarding their advice on coronavirus. I have also attached a screenshot of a tweet sent to their admin department informing them that their international phone number was not working. The emails are mine. The tweet a friend showed me. 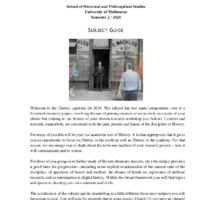 This item was submitted on November 7, 2020 by Josh Abbey using the form “Share Your Story” on the site “A Journal of the Plague Year”: https://covid-19archive.org/s/archive