I for one, hope that our return to our workplace is one of ease-well sort of. I think we all know there will be issues within and outside of our department. One thing I am extremely grateful for is that my wife Ana is still here; I am extremely grateful for that; We have been One since 1980; she has been my moral compass; truth be told, she would say otherwise; but we are Two distinct individuals sharing the same space; some of you may know of her condition but knowing and experiencing are two very different things. Life is so very uncertain. I have since learned to appreciate ‘life’ every day.
Godspeed,
LaRoi Lawton, Assistant Professor
Bronx Community College | Library Department 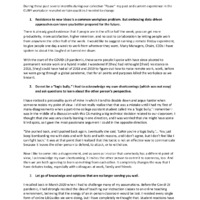 This item was submitted on May 19, 2021 by [anonymous user] using the form “Share your story- Bronx” on the site “Bronx Community College New York”: https://covid-19archive.org/s/bronx-community-college-new-york

Drop a pin to map your location, or a location associated with this item.