Fed up with anti-maskers, mask advocates are demanding mandates, fines — and common courtesy

Fed up with anti-maskers, mask advocates are demanding mandates, fines — and common courtesy

There are a lot of stores that aren’t letting people who don’t wear masks into their stores and there are a lot of anti-maskers in America. A main reason why someone might not want to wear a mask is because they believe that they are losing their freedom by having a government forcing them to wear a mask, even though it’s for the safety of others and themself. Also, a lot of these people tend to be republican, and generally democrats are the ones who are pushing for mask mandates to try to slow the spread of the virus.

The main point of the news article is to tell people that wearing masks has become a political thing, and that many people (mostly democrats) want the government to have mask mandates.

I chose this article because I couldn’t believe that people didn’t want to wear a mask in the middle of a pandemic. It was a little hard to believe because I never really saw a lot of anti-maskers in the media from other countries so I thought it might just be an American thing, or a republican thing. I also think that people who don’t wear masks are a huge reason why we still have so many cases.

The article shows that life during a pandemic is a lot different than normal life in many different aspects. Wearing masks is a new normal, but a lot of people don’t want to sacrifice their comfort by wearing one. It also has shown that the government is still very divided, between the democrats who generally want to have mask mandates and the republicans who generally don’t.

This article is important because it shows how much things have changed since before the pandemic came to America. It shows the political and social differences between people who want to or don’t want to wear a mask.

The article is overall pretty neutral, it isn’t attacking any of the sides. However, most of the situations that it gives show the bad sides of anti-maskers, for example, an anti-masker assaulting a worker who asked them to wear a mask. It also took quotes and opinions from a former Trump supporter and other mask advocates.

The responsibility of the media during the pandemic is to inform people as much as possible about any new information concerning COVID-19. For example, the media should tell people if there are any mask mandates or if the government has any new plans regarding the pandemic.
#sanfransiscobayarea, #californiahighschool, #americanstudies, #media, #news, #masks, #politics 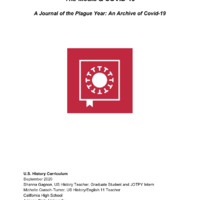 This item was submitted on October 6, 2020 by [anonymous user] using the form “Share Your Story” on the site “A Journal of the Plague Year”: https://covid-19archive.org/s/archive