Early in the pandemic, it became clear the LGBTQ+ people, especially Queer and Trans People of Color, would be disproportionately impacted by COVID-19. There are a variety of reasons for this: LGBTQ folks are less likely to have access to adequate healthcare, are more likely to work in the sevice industry, and are at greater risk for homelessness, mental illness, and violence. Additionally, an emphasis on "stay-at-home" policies meant that LGBTQ people were often forced to shelter in place in hostile environments or were disconnected from their support networks. The following items represent a snapshot into the two predominant challenges facing LGBTQ communities due to COVID-19: access to adequate healthcare and devastating economic fallout. 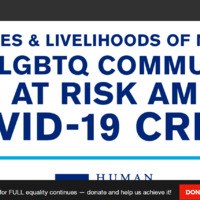 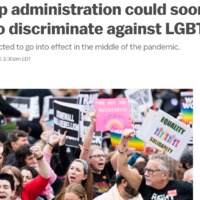 In April, The Trump administration began working toward the repeal of an Obama-era rule making it illegal for healthcare workers to deny care based on someone's gender identity of sexual orientation. The repeal new allows health care providers to deny care to anyone they perceive as trans or gay. 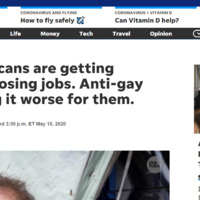 "LGBTQ Americans are getting coronavirus, losing jobs. Anti-gay bias is making it worse for them."

Although states collected COVID-19 data based on age, race and ethnicity, data was infrequently collected on sexual orientation.  Even with statistics lacking, there exists evidency of anti-gay bias in healthcare. A field hospital in New York, for example, required employees to sign a pledge against same-sex marriage. 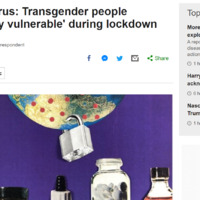 Transgender and gender non-conforming people were left especially vulnerable by COVID-19. The pandemic disrupted both hormone treatments and gender affirming surgery on a global scale. Already disproportionately uninsured and legislatively unprotected, the pandemic was especially devastating for transgender people.

One of the primary concerns facing communities during the COVID-19 pandemic has been adequate access to healthcare.

Even before the pandemic began, significant gaps in healthcare coverage existed. LGBTQ people, especially transgender adults and LGBTQ adults of color, were less likely to have health insurance coverage. On the fourth anniversary of the Pulse Nightclub shooting in June, the Trump Administration finalized the repeal of an Obama-era rule making it illegal for healthcare workers to deny care based on gender identity of sexual orientation. The new rules not only allow health care providers to deny care to LGBTQ people, they also allow insurance companies to ban transition-related care and hospitals to condition emergency treatment on the stoppage of cross-sex hormones. Although COVID-19 data is lacking on questions of sexual orientation and gender identity, empirical evidence of anti-gay bias suggests barriers to treatment.

The prevalence of anti-gay and anti-transgender violence may have had a significant impact on LGBTQ people choosing to delay seeking treatment or receiving inadequate treatment for COVID-19. 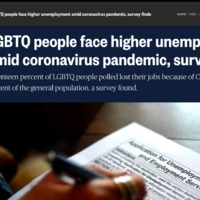 Not only are LGBTQ more likely unemployed, food insecure, or impoverished, but LGBTQ people are also more likley to be employed in the industries most heavily impacted by the pandemic, including retail, nightlife, restaraunts, and K-12 education. 17% of LGBTQ people lost their jobs due to COVID-19, compared to just 13% of their non-LGBTQ peers. As many as 5 million LGBTQ Americans could be economically impacted by COVID. 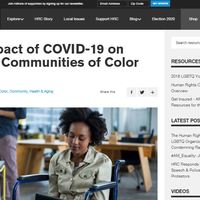 The Impact of COVID-19 on LGBTQ Communities of Color 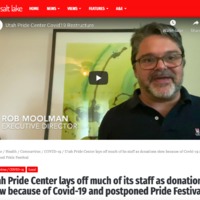 There is some effort to help LGBTQ establishments adjust to socially distanced consumerism and virtual business. However, less consumer spending, slowed donations, and the cancellation of Pride events have all had a signficant impact on revenue generation and led to the closing of both community centers and gay and lesbian bars. The closure of LGBTQ businesses can also result in layoffs that leave LGBTQ workers unemployed. 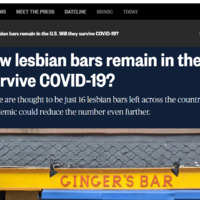 Few lesbian bars remain in the U.S. Will they survive COVID-19?

Often a sort of community center, the closure of gay and lesbian bars is especially ominous for LGBTQ business. The pandemic is a threat to LGBTQ heritage and history, threatening to close even the most revered bars like the Julius' in New York City, The Stud in San Francisco, and even the nationally revered Stonewall Inn.  Considering the number of lesbian bars remaining in the United States at 16 or fewer, some worry that COVID-19 could eradicate lesbian bars entirely.

Prior to the pandemic some of the most pressing economic issues facing LGBTQ communities were poverty and unemployment. 12% of gay men, 18% of lesbians, and nearly 30% of transgender people and biseuxal women are living in poverty; and LGBTQ people are almost twice as likely to be unemployed compared with their non-LGBTQ peers. Systemic inequality persists even for LGBTQ people who are employed, as LGBTQ people on average make less than their non-LGBTQ peers. These inequalities have only intensified with COVID. Nearly 1 in 5 LGBTQ people, and nearly 1 in 4 LGBTQ People of Color, have lost their job due to COVID-19. LGBTQ people, especially LGBTQ People of Color, were also more likely to ask for delays with bill or rent payment. In addition to the individual economic impacts of COVID-19, the pandemic has marked a difficult time for LGBTQ businesses. While there is some effort to help LGBTQ establishments adjust to COVID-19, closures of LGBTQ businesses and organizations-- especially gay and lesbian bars and community centers-- represent an ominious trend for LGBTQ communities.

As the pandemic continues to grow in the United States, the economic devstation to both individuals and businesses will likely only continue. 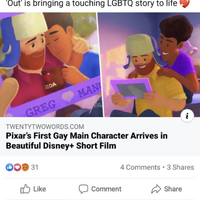 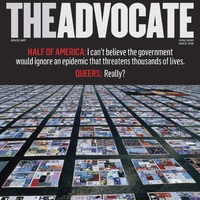 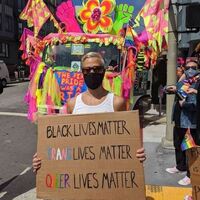 At the end of May and the beginning of June, the murder of George Floyd sparked nationwide protests addresing police brutality. The protests-- which happened throughout Pride Month in June-- encouraged many to think about the relationship between anti-black racism and violence against Queer and Trans Women of Color. 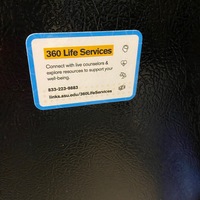 Even before the pandemic, LGBTQ people were more likely to have anxiety and depression. Forced to shelter-in-place, often away from community or in unsupportive environments, items the emotional toll of COVID-19, especially on LGBTQ Youth both in the United States and globally.

While not exclusively LGBTQ issues, there are many submissions in the archive which may later prove salient for understanding the issues facing LGBTQ communities. Coverage of pandemic skeptics, antiretroviral drug shortages, #BlackLivesMatter protests, and the mental and emotional toll of isolation all offer insight into the multiplicity of issues facing LGBTQ people. As the archive continues to grow, more connections will emerge.