Nature and Environment in the High Sierra

This exhibit page showcases various environmental impacts on camp during 2020-21, some directly caused by the pandemic and some unrelated. These impacts include new types of trash such as masks, drought and fire risk, fires and resulting poor air quality, and winter storms.

The requirement that all people wear masks inside the Program Office and Mess Hall, and the resulting abundance of people wearing masks, provided a new type of litter that could be left throughout camp. Masks were occasionally found throughout camp, from campsites to program areas. The changes made as a response to the pandemic also affected the natural environment. 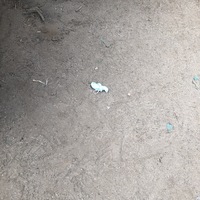 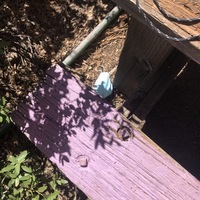 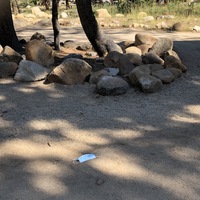 Like much of California and the western United States, Camp Wolfeboro experienced extreme drought conditions during the summer of 2021. Extreme drought, according to the National Integrated Drought Information System, entails:

Because Stanislaus National Forest met a variety of fire risk indices this summer, including low dead fuel moisture content, the Forest Supervisor issued an order barring charcoal-based campfires in parts of the Forest, including Camp Wolfeboro. This order was made "to provide for public safety and protect natural resources", which fire risk threatens. The order prevented Camp Wolfeboro from using wood-based campfires during the summer of 2021. 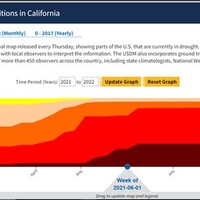 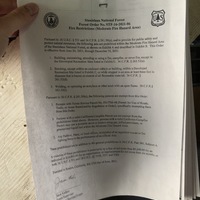 The region around Camp Wolfeboro experienced various wildfires throughout the summer of 2021, from the relatively small Henry Fire only 10 miles northeast of camp, to the 50,000-acre-plus Tamarack Fire in Alpine Co. None of these fires entered or even threatened to enter the camp, but they likely resulted in occasional poor air quality.

For example, according to Sacramento Region Spare the Air, the northeastern portions of Calaveras and Tuolumne Co., where camp is located, experienced unhealthy air quality from roughly 8:00 AM to 10:00 AM on the morning of July 22, 2021, during the fifth week of camp. From approximately 7:00 AM to 12:00 noon, the camp's air quality was unhealthy for sensitive groups. In the AQI animation below, it shows that the poor air quality spread from Alpine Co. westwards and southwards towards Wolfeboro.

The smoke outlook report attached below says "Winds become variable tonight [July 22], which may bring smoke into areas south of the fire, including Topaz Lake and Bridgeport [in Mono Co., south of Alpine Co.]". The report also acknowledges that the Tamarack Fire increased in size by 10,000 acres from July 21 to July 22. Even though the report and the on-the-ground situation have time discrepancies between each other, it is reasonable to conclude the rapid increase in the size of the Tamarack Fire and variable winds caused poor air quality at Camp Wolfeboro on July 22. This is only a snapshot of air quality on one day of a camp open for multiple weeks in the summer. 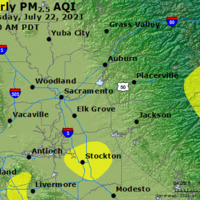 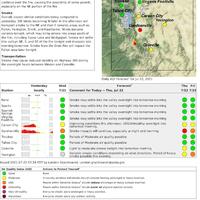 Fire season impacted camp, but so too did winter weather patterns. A storm caused by a jet stream over the Sierra Nevada brought abundant snow and wind, casuing damage to Camp Wolfeboro. At least 40 trees fell in camp, and the water heater shed was destroyed. The camp asked for donations to help fix the infrastructure damage. Storm behavior in California is being exacerbated by the increasing temperatures of the planet. 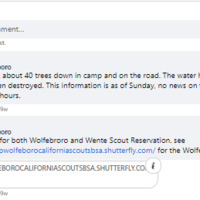