How one Hispanic female dealt with the cooking challenges that took place in the early months of the pandemic. In particular, one meal she prepared on September 26, 2020. 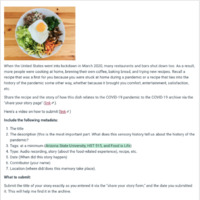 Interviewee Gender (Friend of a Friend)

Interviewee Age (Friend of a Friend)

Interviewee Race/Ethnicity (Friend of a Friend)

How one Hispanic female dealt with the cooking challenges that took place in the early months of the pandemic. In particular, one meal she prepared on September 26, 2020.

Diane Ramirez 0:02
My name is Diane Ramirez and I'd like to talk a bit about my summer in lockdown. The first few months of the Covid-19 pandemic were unlike anything we've ever experienced before. There were shortages of basic household goods such as toilet paper in cleansers, as well as basic ingredients such as flour, eggs and milk. When I think back to that time, and how ill prepared we were to deal with the pandemic, I marveled that we somehow managed to work things out. The pandemic is far from over. But the streets are no longer dark and empty. And we try to figure out ways to move forward again. What changed for me during those months, I'll say between the months of March and November of 2020, was that I had a lot more time to cook but less access to a variety of ingredients, which forced me to get creative. I did a lot of ordering through local restaurants here in Austin, Texas, restaurants which are struggling to stay afloat. For instance, we bought lots of amazing meal kits that turned our weekday dinners into celebratory events. We did virtual cooking and baking classes, cheese tastings, and liquor tastings. Oh, those liquor tastings. In our family alone, we curated tastings for whiskies, rums. brandies, and tequila and mezcals. And my cocktail game at home was on fire. I don't want to say that I drank too much during those months. But my doctor did tell me to stop drinking outright late 2020. One of the more memorable meals I prepared was on September 26. I took a virtual cooking class presented by the San Francisco based culinary school 18 Reasons. The menu was based on the Yunnan province of China, which borders my Myanmar and Laos. The recipes we made that day were stir fried beef with mint, roasted eggplant salad and sticky rice. This meal was to put it bluntly, sexy. The flavors were intense and robust. Ginger, mint, chilies, vinegar, herbs, aromatics. The eggplant salad was very tomato forward, but the flavor was completely unexpected. It looked like an Italian dish but really stood on its own. I'll never forget the way my mouth responded to all the different notes of this meal, the way the sides of my tongue tingled. None of the ingredients were particularly hard to find or to make substitutions of, but the result was exotic and comforting at the same time. Sadly, our world was entirely wrapped up in this terrible disease, which made the planet seem smaller somehow. And although I have dreamt of going to such a distant land as Laos for a long time. That day, I found a kind of kinship with its people in tasting its flavors. This was one of several meals I enjoyed during those difficult months. But I'll always cherish that special memory.

This item was submitted on August 7, 2021 by [anonymous user] using the form “Upload” on the site “Oral Histories”: https://covid-19archive.org/s/oralhistory