When I realized I was going to be quarantined in New Orleans for the foreseeable future, I signed up for texts from the mayor. These three, sent within hours of one another, suggested an evocative sketch of the landscape that is New Orleans, encapsulating both the threats we face and the ways we respond to them. The first text was about the morning's severe weather (often a threat in New Orleans), which disrupted Covid testing. The next was about how we can help those facing the threat of food insecurity. The last compared the death rate from Covid to the city's homicide rate (which tells you as much about violence in the city as it does about the pandemic).

I was talking on the phone last night with a friend who said she's heard a lot more gunfire in her Bronx neighborhood than usual. She said she worried about an increase in violence as the pandemic widens existing inequities in our country and people become more desperate. 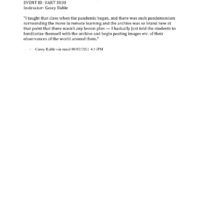