This is a personal account of my time during the height of the pandemic, how it affected my studies, and ultimately the crushing loneliness of it all.

Hello, My name is Shemar Providence and this is my account of the COVID19 pandemic. I will begin at the start of the virus. During this time I was going to classes as normal. The virus had become known as it swept through Wuhan china. My mother and I were worried that it would eventually make its way over to the states. Overall I would describe the climate around the virus as a general sense of apathy. “As long as it wasn't over here everything is fine” was a common sentiment among my peers as well as governing officials. It was the beginning of March when it began to spread like wildfire in new york. The most apathetic of us were now worried or decided to stay home. Colleges began to transition to online learning to stop the spread. Within about 2 weeks, from the gossip to the first outbreak, New york was put into a standstill.
I was born with asthma as well as a weakened immune system. For me, the virus was a matter of life and death. I live with my mother who quarantined me in the house until the virus would cool down. We bought masks, hand sanitizer, gloves, whatever we could get our hands on to keep each other safe. During this time the mania had begun all over the country. People were buying things in bulk fighting each other over the most basic of things. It was a mess. it was approaching the end of March. In just a few short weeks I got a glimpse at what pandemonium looked like.
Remote learning was a challenge. My neighborhood had poor connectivity issues. For about half of April, I had no internet connection and could not reach 2 of my professors. I ended up not getting credit for those classes. For the other professors, I was able to reach I was able to come up with a compromise. A lot of instructors weren't really well versed in remote learning and would go missing some days. With poor connectivity zoom meetings would stutter and stop. Overall the entire learning process was halted not only for me but for others as well. Considering how many others had a poor connection and were forced to drop classes.
The greatest thing to experience first hand was the politics of the virus. You would think a matter pertaining to community health would not become a divisive issue but it was. Like everything in recent years, it had to be split down the middle to appeal to the most radical on both sides. Some people were saying it was a hoax and that the government was seeing how far they could control people. These people felt as though being forced to wear a mask violated their civil liberties. These were the most apathetic of us not caring about what happens to those of us who are less healthy. They bemoaned anyone who would wear a mask as a democrat thus sparking the aforementioned democrats to return fire. And like that the division grew. I think the isolation from the quarantine probably helped to heighten tensions but looking at it live it just seems so stupid. A matter as simple as stopping the spread became a democrat and republican issue, and a rights issue. republican s even put less emphasis on the virus due to it spreading in primarily blue states. It was all truly awful.
With the country seemingly falling apart in pandemonia staying at home felt more and more suffocating. The same four walls became a coffin of sorts. If the virus got in I would be done for. However, I was still dead to the world around me. Keeping touch with friends was my only salvation between schoolwork and deafening silence. It didn't help that my own mother kept live streaming the ongoing pain at its height. I couldn't escape it. The death of the depression the pain. It was all around me. People I knew and loved in my neighborhood died and I couldn't even see them go. I grew depressed and more cynical as a person. It seemed like hell. It just kept going and going. School ended leaving me more depressed over my studies than ever. But at least the rate of death had started to decrease.
It is starting to get better, slowly but surely. But it still feels as though there is worse yet to come. This year has been so divisive and sad. And I feel like it will just keep getting worse.
Sophomore majoring in HSNC

Text story, and i wrote it 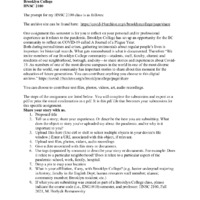 I agree to a CC NC-ND license

Item: A cacophony of silence