We have preserved in this short film a selection of Theatre Workshop students' authentic experiences during the COVID-19 pandemic and we want to share these stories with you.
Associate Professor, Director Theatre Workshop. 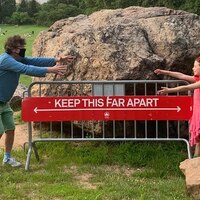 Special Thanks to: Prof. Jeffrey Wisotsky, Lile Akther, Devin Prevost and the Media and Digital Film Production Program, ​Dr. Sara Brady and all of the faculty in the Communication Arts and Sciences Department, Barbara Thomson, Stephanie Polo, Yvonne Erazo, Dean Manny Lopez and BCC Inc., the staff of BCC, and Dr. Jennifer Socas

This item was submitted on February 9, 2021 by [anonymous user] using the form “Share your story- Bronx” on the site “Bronx Community College New York”: https://covid-19archive.org/s/bronx-community-college-new-york

Drop a pin to map your location, or a location associated with this item.