Kelly McDaniel Oral History, 2020/05/28
Interview with Kelly About the Experience of Visiting a Rural Doctor's Office During COVID-19

Interview with Kelly McDaniel of Blanchard, Oklahoma by Clinton P. Roberts on 05/27/2020. Kelly speaks about her experience of visiting a rural doctor's office during COVID-19. Kelly comments on the changes of procedures and the anxiety of possibly having COVID-19. Submitted for the #ruralvoices collection. Contributed by Clinton P. Roberts, curatorial intern for Arizona State University, HST 580. 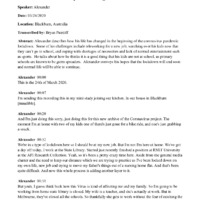 Interview with Kelly McDaniel of Blanchard, Oklahoma by Clinton P. Roberts on 05/27/2020. Kelly speaks about her experience of visiting a rural doctor's office during COVID-19. Kelly comments on the changes of procedures and the anxiety of possibly having COVID-19. Submitted for the #ruralvoices collection. Contributed by Clinton P. Roberts, curatorial intern for Arizona State University, HST 580.

Clinton Roberts 0:01
Okay, Kelly, recently you went to the doctor for the first time during the COVID-19, what was that experience like?

Kelly McDaniel 0:12
Um, I went to the SSM health clinic in Blanchard. It's my regular doctor's office. I was having some allergy troubles. And the the setup had changed. When I made my appointment over the phone. They told me when I got there, I had to stay in my car and call the doctor's office and they would let me know when a nurse was ready for me and the nurse would come out to take my temperature and vital signs before entering the doctor's office.

Clinton Roberts 0:44
So when you got to the doctor's office, and you went through this process, did it strike you as something really strange? Or did it just seem normal? What were you thinking? Or did it- did it stress you out doing something different like that being sick?

Kelly McDaniel 1:02
Um, it did worry me, I mean, all the nurses, of course, had masks on. Every- we had, I had to wear a mask, all the patients, everyone inside had to wear a mask. They were taking everyone's temperature before they came in. When you walk in, instead of having a waiting room full of chairs that used to have probably 20 or so chairs in there, they had maybe six and they were all spread out. Nobody was in the waiting room. And they, you know, the nurse led me right back. And everyone I saw was wearing a mask and gloves or as bottles a hand sanitizer. Anytime you touched anything, they were like, here use hand sanitizer. And so there was really not a lot of, other than the nurse having to come in contact with me to do my vital signs, there was not a lot of up close contact. Everybody stayed kind of far away, unless they were physically doing blood pressure or something like that.

Clinton Roberts 1:58
Were you concerned, going in, that you might be in the same doctor's office as possibly somebody who had been tested for COVID-19? Or maybe had tested positive or was contagious?

Kelly McDaniel 2:12
Um, yeah, just my own fear. I mean, they were wiping things down. But still, when I sat in the chair, waiting for the doctor, I was trying not to touch the arms of the chair. Unfortunately, I was there because my allergies were making me dizzy, so I had to hold on to the chair. And just my own paranoia, I kept using hand sanitizer whenever I had to touch the chair or, you know, touch my phone to look at something on my calendar. It was kind of worrisome. But everybody there was, you know, using, I guess, correct procedures. They were wiping down, you know, stethoscopes, wiping down doors, wiping down the pins. Everybody had to use hand sanitizer before and after they touch something. So...

Clinton Roberts 2:57
And since you were sick, and you said you- you're experiencing sinus infection issues. Were you concerned maybe that this could be symptoms of something or that maybe you were going to be tested for COVID-19?

Kelly McDaniel 3:11
I was. I mean, I didn't have fever. It was not my chest. It was you know, mainly sinuses. It's Oklahoma. We have horrible allergies here. And but I was still worried that they were- that it could possibly be COVID or that they weren't going to test me for COVID. And it was troubling, because I wasn't sure.

Clinton Roberts 3:33
Yeah. And so once you left there, um, did you, did you feel like the experience itself was something that was really different? You know, because I realized, like, of course, we'll just state here that you didn't test positive for COVID-19? Because we talked about it. But so what did your doctor tell you about your symptoms or anything about COVID-19? Or what to experience? You know, like, as you're leaving.

Kelly McDaniel 4:06
Um, she just, you know, she started off with there were more questions about it than usual stuff, not just you know, have you been running a fever or, you know, you having trouble breathing? But also do you still have a taste? Do you still have this sense of taste and smell? And, you know, have you been in close contact with anybody who's had it? You know, are you having trouble breathing? There were a lot of those kind of questions before we even started on the main thing. And another thing that was kind of, was odd is my doctor's kind of hands-on, as far as, you know, if she can knows a technique or something like to cure dizziness or something she'll you know, manipulate your head or whatever to help you. Because of what's going on, instead of her doing the exercise on me, she gave me a link to a YouTube channel that showed how to do the exercise to help with vertigo at home. If I were to ask if she would have done it on me, but she said, because it involves balance and dizziness, it can cause vomiting. And with the COVID-19 going on, that just puts added risk to her and myself having to do that in the office.

Kelly McDaniel 5:20
So she, you know, recommend that I just do the exercise at home.

Clinton Roberts 5:24
Did you, did you feel like she was also, I guess, displaying some distance that you normally wouldn't have observed? Like she stood a little farther away? Or was the distance kind of the same for you?

Kelly McDaniel 5:34
And the rooms are pretty small as they are. But, um, yeah, as far as you know, when she when I had to pull my mask down, so she could check my throat and my nose and all the fun stuff. She stood a little farther back. And, you know, I try not to bring things like that. So other than that, I wore my mask the whole time.

Clinton Roberts 5:54
And of course, I guess she wore a mask?

Kelly McDaniel 5:56
She had a mask on, yes. Everybody in the office had masks on.

Clinton Roberts 6:01
As she's walking you through these different things, and she's given you like a YouTube video and stuff like that. Did you feel like you probably were more alleviated that you didn't have COVID-19? And you were less worried about whatever you did have? Or was that more of a concern than what you were dealing with at the moment?

Kelly McDaniel 6:20
Um, I, I felt a lot better knowing that, you know, as a doctor, she said, I did not, you know, I didn't have any of the symptoms of it. Because even though I had Googled, and I, I knew that I really wasn't experiencing them as part of in the back of my brain was like, yeah, but you could still have it. You know? So yeah, it was, it made me feel a lot better just her saying, you know, I don't think you have it. You don't have any of the criteria, your lungs sound fine and things like that.

Clinton Roberts 6:49
So she didn't even recommend...

Clinton Roberts 6:52
Okay. So like, as you left the doctor's office, and you went back, you know, as you exited the building or whatever. What were some of the things that were going through your head as far as like, did it feel like at the moment, something you were dealing with, was significant? Did it seem like the experiences you were going through were so different from what it was before the pandemic, that you were starting to realize anything about the significance of everything, and the way things changed?

Kelly McDaniel 7:26
Yeah, there was a certain- I mean, just from my point of view, usually, I, you know, get a printout of my receipt, and I'll get a copy of my, you know, the appointment review paperwork and stuff after visit paperwork. And this time I didn't, I really didn't want to touch anything other people touched us, you know, try to avoid that as much as possible. So when she asked if I wanted copies of my stuff, I told her no, I'll just, you know, try to get it online. Because I didn't want to have more contact with people than I had to.

Clinton Roberts 8:02
Now, like, from the perspective of living in Blanchard, knowing that, say, roughly at this point, like 20-25 people have had COVID-19 actively, I'm not sure how many have it now. But up to this point, they've notified that about 25 people have had it. Was there a point in during this process where you kind of thought, I'm sure one of these people have been to this- this is where they first reported? You know, they came here just thinking they had the flu or something?

Kelly McDaniel 8:39
Yeah, I did. In fact, we, I had to go pick up my prescription on Walmart afterwards. And as soon as you know, I got home, I changed clothes. I didn't want to wear those anymore. Because, like I said, I had to sit on the chairs. And I know they spray them and I know they cleaned them. But still it was I mean, going to Walmart is bad enough, but the doctor's office itself, it's- Yeah, it was bothersome.

Clinton Roberts 9:03
And then now just like looking forward, what- what would you want to be remembered about this experience? What what seems so different that you would want people to know how much things have changed during this time.

Kelly McDaniel 9:18
Everybody was still very friendly. It wasn't like anybody was cold or anything, but you could definitely tell the atmosphere had changed. Because it's a small town and, you know, everybody kind of knows each other and things and you know, the doctor remembers you because, you know, she doesn't have 5000 patients. Um, it was like, it wasn't as personable as usual. I mean, we still talked and, and chatted and stuff, but you know, the mask and the distance and stuff like that. It just was a little more distant. You didn't have that same closeness as usual.

Clinton Roberts 9:53
Alrighty. Well, thank you so much, Kelly. This is Clinton Roberts. I'm a graduate student at Arizona State University. This is for HST 580. Thank you.

This item was submitted on May 28, 2020 by Clinton P. Roberts using the form “Share Your Story” on the site “A Journal of the Plague Year”: https://covid-19archive.org/s/archive