The videos that I am sharing are from the Portland Protests. I feel compelled to share them because protests at this scale are unprecedented in their diversity, longevity, and turnout, and may represent a social tipping-point precipitated by the dual economic and health crises imposed by COVID-19.

Before COVID-19, I had planned to spend Spring Break visiting friends in Portland, Oregon. Midway through the break, my university moved classes online and I had the opportunity to stay in Portland for 5 months. On May 25th, the murder of George Floyd by Minneapolis police sparked national protests against systemic racism and police brutality. The Portland protests were especially large and active, which garnered significant media coverage and led to deployment of federal agents to the city.

In the midst of a pandemic, when so many healthcare workers found themselves without adequate PPE, police departments across the country were armed with seemingly limitless munitions and riot gear. Tear gas, pepper spray, sonic weaponry, batons, and riot shields were used against demonstrators, whose defenses were composed of homemade shields, leaf blowers, traffic cones, and water bottles. Yet he crowd still showed up at the Justice Center every night, and many are still there after nearly 4 months. These protests are unprecedented, and have caused many Americans to adopt radical stances against racist and unaccountable policing, and we would be remiss not to document them as part of the Plague Year.
This submission consists of photos and videos taken during the Portland protests, posted on Twitter by @IWriteOK 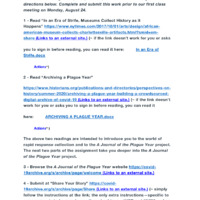 This item was submitted on August 23, 2020 by Kelly Lindemann using the form “Share Your Story” on the site “A Journal of the Plague Year”: https://covid-19archive.org/s/archive