The beginning of 2020 was actually going really well for me. February was Lunar New Years, and it was one of the best years I’ve had lion dancing. Later that month it was Vietnamese culture night, and me and some school friends decided to form an impromptu team to perform for the event, and eventually it led me to starting an actual lion dance team for my school. A little context to this is that I’m a very young, but passionate lion dancer, and I’ve been lion dancing since I was in 7th grade. Growing up I always wanted to be a lion dancer, and never in a million years would I have imagined that I'd end up starting and running one. So when I did it was one of the most exciting things that happened to me, and life for me was starting to look good; I was doing well in school, I finally asked out this girl I had a crush on, and I somehow recruited members for this school lion dance team. I will always rember that day, March 13th, 2020. I remember it was a wet and rainy day, but the rain had stopped for a bit. So we decided to have practice. I remember in the middle of our practice, we had received an email from the school saying that we would shut down. (Ironically, I remember being in 5th period, joking about how I’d take one for the team and get COVID so school would get shut down) I remember everything was just quiet in that moment, then suddenly everyone started to freak out. They worried about their AP exams and their stuff from sports and yearbook, etc. On the inside I was freaking out too, but I tried to keep my composure and tried to get back to practice. But eventually we all decided to end practice early. I remember going with my brother after that to get sushi with our Vietnamese teacher and we just thought it was going to be a short term thing. In the beginning I thought it would be a fun and breezy 3 weeks. But 3 weeks became 3 months. And 3 months became 9 months. I remember just sitting at home and feelin devastated about the current situation. I didn’t think that it would ever be so bad and it’d be such a low point in my life. I remember waking up everyday during summer feeling more and more worthless, with no goal or idea of what to do next. And this thought basically continued into the new school year, but it suddenly got worse. It was the middle of November and I remember jogging and i felt like i was choking, I rember i got home and fell down and just started gasping for air. Later my family got tested and turns out I had COVID. And what I thought was isolation became even more isolated. I was all alone, both emotionally and physically. There comes a time where you become tired of everything and you just lay in bed and stare at the ceiling and wonder, “Why the hell is this happening? Is everything I do a failure? Why do I even have these hopes and aspirations when it seems like the world doesn’t approve of it anyways?” But there was one thing that really comforted me, and that was anime and manga. I remember re-reading one of my favorite series, and a certain line always stuck out to me, especially during my quarantine. It was a simple line said by the protagonist(?), Eren Yeager from Attack on Titan. “We need to keep moving forward, even if we die, even after we die.” I think this line really stuck out to me because it gave me a simple yet unclear solution to this unprecedented situation. I just need to keep moving forward; because there’s really nothing I can do except dwell on all that I've lost. But if I just sit and dwell then I would never know if there’s hope moving forward. Even now as I’m writing this, it is approaching Lunar New Years, but almost everything is cancelled. Sure it hurts to see lion dance teams around the globe take off while mine is stagnant, or see people finding new romance while I’m here getting rejected and ghosted, but what more can I do except continue walking. If I had to sum up my whole lockdown situation with one word, it would be hibernation. I don’t know if lions hibernate, but mine is, and so am I. We’re not resting per se, but waiting for this tough time to pass so that when we come out of hibernation, we come out better and stronger than before. 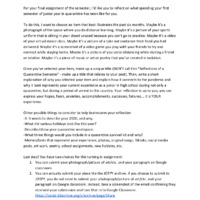 High School Reflections on a Semester of Online Learning 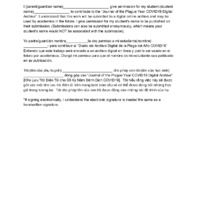 This item was submitted on January 21, 2021 by Joseph Nguyen using the form “Share Your Story” on the site “A Journal of the Plague Year”: https://covid-19archive.org/s/archive