The rise of anti-Asian crimes has been a focal point of my predominantly Asian and Latinx community, and has increased to a point where our local police are trying to send out messages of reassurance and solidarity. But this isn’t something that comes out of nowhere. It has been bubbling under the surface as long as Asian Americans have lived in this country. The Chinese Exclusion Act, barring Asian citizenship, miscegenation laws, land laws, internment camps, the murder of Vincent Chin, hate crimes against Southeast Asian refugees, the stereotypes, the cheap sitcom jokes and potshots, the dual embrace and distaste of the so-called “model minority.” A year ago, as COVID-19 began to infect our everyday life even prior to shutdown, many of my students recounted racism they faced at the grocery store or other public places, as Asians were made the scapegoat of the pandemic. This racism was not happening in the Midwest, it was happening in diverse Southern California. How many times this year have I had the conversation with students, family, and friends about the otherness that is associated with being Asian in America? As half of an interracial marriage with an Asian partner, I have seen first hand the comments. Going to Disney World and having my husband joke that he had seen one and a half Asians that week, himself and my daughter - and seeing the stares. Comments from Disney World or airport employees who stared at us and said in a off putting tone, “you must be from California or Hawai’i,” to which I shot back with “why, because we’re so happy and relaxed?” They didn’t crack a smile. Or my husband’s best friend, who in medical residency in Kansas City was approached in a Panera Bread with a man saying “whaaa, you want to fight Bruce Lee” and being asked by his medical resident roommates to translate Ninja Warrior for them because he “knows Chinese” (he’s third generation Japanese American). The friend in grad school in Michigan who, while walking down the street, was met by women who held the corners of their eyes and chanted “ching chong, ching chong.” Never once has anyone repeated the question “where are you from” when I tell someone I am from California. My Asian American husband is always asked at least twice. Also from California, when he responds to the simple question of where is he from with “California,”there is always the tone change and the slowed down, “No, where are you FROM?” Because the underlying, uncomfortable reality is that apparently if you’re Asian, you can’t be “from” America. Your identity is forever a hyphen. But this was not part of the public conscience until recently. With the rhetoric of leadership that continually blamed China for COVID-19, using ethnically offensive names, the acts of racism my students were experiencing in March have evolved into full fledged violence and crime, peaking yesterday with a shooting. Here we are in another moment when COVID-19 has uncovered the ugliness that lies beneath the surface in a country that calls itself a democracy. A country where the police spokesperson tried to explain away the targeted murder of eight Asian women yesterday by saying the Caucasian male shooter was having a “bad day.” No justice, no peace sounds hollow when you wonder if there ever will be either. 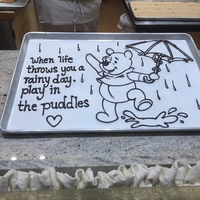 This item was submitted on March 18, 2021 by Kathryn Jue using the form “Share Your Story” on the site “A Journal of the Plague Year”: https://covid-19archive.org/s/archive